This day in Wrestling History 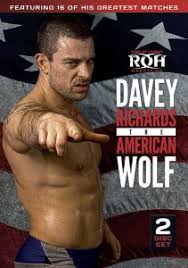 Happy birthday 30th birthday to former ROH World champion Davey Richards. Davey has had some great matches a part of Ring of Honor like Ladder Wars, matches Eddie Edwards, Tyler Black, etc. Also in 2010 when Davey & Eddie separated and became singles wrestlers it was the TV title tournament finals when Davey fought Eddie we saw just how talent both guys were. Then we saw more great matches from them 2 years later when they were fighting for the ROH World title vs one another. Davey is an accomplished pro-wrestler & amateur from operating his own Do-Jo with fellow wrestlers Kyle O' Reily and Tony Koznia. To becoming one of the best wrestlers in the world and a household name on the indy circuit.

Popular posts from this blog

By Mike - August 08, 2011
With the first tv taping on the horizon ROH has been trying to sign many of their stars to new deals like Davey, Eddie, Roddy, Genrico, etc. They have however signed Tomasso Ciampa, Hass & Benjamin, Cole & O' Riley, as well couple of other people. Today the news broke that you should add another to that group and his name is Jay Lethel competing last at BITW for ROH is scedualed to challenge Genrico this saturday night for the TV title. Jay had competed for ROH in the past in 2003-2006 in which time he held the ROH Pure title, contend for the tag team with many different partners, as well feuded with top stars like Daniels, Punk, Joe, Hero, etc. Now that Jay is back what does the future hold for him in Ring of Honor you wont have wait to long as this Saturday night the future begins for not only Jay, not only the stars of the company, but for ROH as whole. Check your local listings for the time in your area as

By Mike - February 21, 2013
To be specific I am not rebooking two years I am just rebooking from August 1999 to the end of March 2000. This will be different then any other How I would book it that I have done before because instead of just keeping the roster and everything I am changing a lot with this company. Below are somethings that I am changing and people that I will be letting go. But first the background: In 1997-1998 WCW had the two best years by far any wrestling company has ever had they could do nothing wrong but they did. All the things they did wrong seemed to start catching up with them in 1999 and people began to noticed the ship beginning to sink. A month before Bischoff got fired in real life I am going to step in and stop the ship from even going down. At the end of this series I would like feedback to see if you guys think this could have helped WCW. So now join as we journey back to a time when Wrestling was cool and relevant, people were excited to see it and never missed it. Join me as we…
Read more

After a brief hiatus the How I would Book it series has returned with an interesting topic in my book. I will attempt to rebook WCW/NWA 1990. So instead of seeing Ole Anderson, Jim Herd, Ric Flair, Dusty Rhodes, etc I will take control of WCW to try an right the ship. After big business in the early and mid 80's things started to crumble in Mid Atlantic Wrestling which was headed by the Crocketts. But then in November 1988, The Crocketts were forced to sell Mid Atlantic to Ted Turner because they went bankrupt. WCW remained within the ranks of the NWA until September 1993 when they when a disagreement over who would carry the NWA title forced both sides to split. But back to 1990, WCW was back in the drivers seat but had to make up ground on WWE after 2 dismal years. Now because of the fact that Jim Herd isn't here, that Ole, Dusty, or Flair aren't booking I believe that I can keep WCW going in the right direction.

So, Join me as we once again travel back in time 22 years…
Read more